“Miracles reawaken the awareness that the spirit, not the body, is the altar of truth”     …ACIM

I have only one message to express, and I simply love to write about it. I read it in A Course in Miracles, and then thought about it until I could feel the ultimateness of it. It’s a simple message, and therefore, very easy to grasp. It’s this: What is true is true, and what is false is false. It’s the same as saying, the Truth is true and nothing else is true. What is true cannot be false, and what is false cannot be true.

This world is built on beliefs, and that includes your beliefs about yourself. What you believe decides your perceptions as to what you are. You’re either a physical being that’s destined to grow old, get sick and in the end, die; or you’re an unlimited and ageless Spiritual creation that will never grow old, get sick or die. It’s your beliefs that decide which one of these scenarios will play out for you. As you perceive yourself so will your experience be in this journey through that which we erroneously refer to as life.

One thing’s for sure; you’re either a body or something else. You cannot be two. You’re either physical, or you’re not, and it’s entirely your choice as to which one you believe to be your reality – again, you cannot be both. But that notwithstanding, what you really are is not up to you. Your reality is not your choice. Whatever you choose to believe about it is your choice; but your reality is not. That was established by your Creator when you were created, regardless of what you believe about it.

The great thing about it is, deep in your mind, way down in that place beyond conscious awareness, you already know which one you are. That’s why my opening quote advocates that Miracles reawaken the awareness of it. 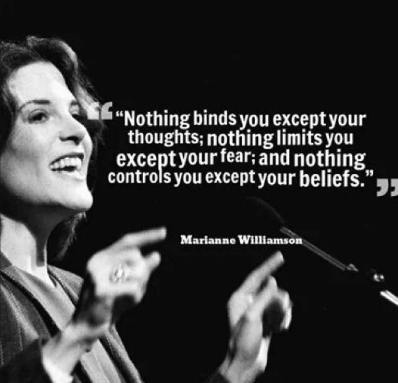 “…A temple is not a building at all. Its real holiness lies in the inner altar around which the building is built.”   …ACIM

The above metaphor is used to portray that which those who fail to recognize the Spirit look upon when they behold another with the body’s eyes. Physical eyes can show only the outside form, which is where their ability to see comes to a screeching halt – it can go no further. They look upon the outside walls of flesh and send messages back to the beholder, informing him of all the beauty – or the lack thereof – there is to see in the body – which he believes to be the temple. Whether they show him beauty, or are unable to find any, depends on the perception and therefore, the judgment, of the one doing the looking. For if he believes the body is the whole person then there’s only his own judgment left to decide whether there’s any beauty to be seen, or not.

“Beauty is in the eye of the beholder”  …Margaret Wolfe Hungerford

This phrase has been around for centuries, and therefore, it is well known by most everyone. But any truth it may contain is open to question, and, like the beauty it describes, is in the perception of the individual. I say this because only in this physical dimension can it be said to contain any semblance of truth at all. That being said, it does seem that in this world everything is judged individually, and therefore one person may see beauty where another would see only ugliness. Richard Bach was well aware of this when he penned the following quote: “Don’t believe what your eyes are telling you. All they show is limitation. Look with your understanding, find out what you already know…”

As I mentioned above, and as Mr. Bach informs us here, we already know what we are. Come to think of it; how could we not know what we are? The thing is, most of us are completely unaware of this knowledge and therefore, unaware of our true Selves. The surface of our existence, which is the physical dimension, is where the body exists, which is home to the ego. The ego is a false self that we have made which most of us believe is our true Self. I’m aware of how difficult the following is to accept, but as I said in the beginning: What is true is true, and what is false is false. Everything in this physical world, including the body and the ego, is an illusion.

The only thing that can change this perception most of us hold of ourselves is change itself; but not the usual change we’re so used to seeing in this physical world. In this world of illusions everything changes continuously. There is no reprieve from change here. But nevertheless, that’s not the change I’m talking about. All change here is part of the illusion, which most of us believe to be real. 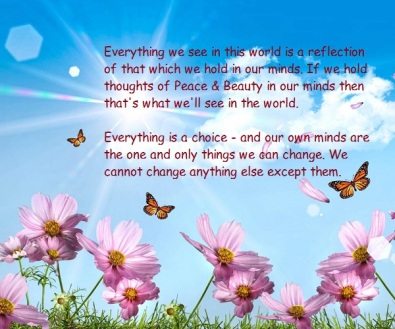 I’m talking about the one and only thing that we can deliberately choose to change, which is our minds. Again, I’m not talking about changing them in the usual way, such as changing them to go here instead of there, for example. I’m talking about the sort of change Richard Bach was describing when he said,  Don’t believe what your eyes are telling you. That would require real change – a deliberate choice to see things differently. And he went on to divulge the reason why he suggested this change; All they show is limitation. Or as I pointed out above, physical eyes can show only the outside form, which is where their ability to see comes to a screeching halt. That’s their limitation.

Mr. Bach suggested there’s another way to see; he said, look with your understanding,  find out what you already know. This type of seeing requires the only miracle that can ever happen – a true change of mind from ego teachings to Divine Teachings. All other happenings that we refer to as miracles are simply results of this one, and are not really miracles at all.  And it’s this miracle that reawaken the awareness that the spirit, not the body, is the altar of truth. It compels us to look beyond the flesh and to recognize the Spirit as our one, true Self.

I’m going to close this post with some words of wisdom from the English biologist, Thomas Henry Huxley. He said, “There are some people who see a great deal and some who see very little in the same things.”